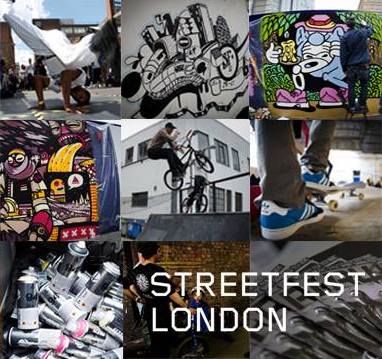 StreetFest returns to East London to celebrate its 10th anniversary this September.

After a brief hiatus, the UK’s premier urban culture festival is back with yet another fresh take on all things street – live art, dance, fashion, sports, music, food and more.

Pulling together all the elements that define London’s underground culture – at a time when it feels most under threat – StreetFest is a platform for some of the country’s most creative minds to express themselves, and with attractions fit for all ages to engage with.

The anniversary edition is taking place on 15th September in Dalston’s Gillett Square, the perfect location for a block party set to live long in the memory.

Get your FREE ticket to #SF2018 here: http://po.st/StreetFestTickets

This 10-year celebration is as much about looking back as it is looking forward, so who better to assume control of the Main Stage than legendary London party Co-Op and their Selectors Assemble crew?

Having relaunched in 2016, the collective that established itself at the iconic Plastic People club are more vital than ever. Don’t get it twisted, though – this isn’t a group of DJs back on the nostalgia circuit. Selectors Assemble has provided a platform for some of the country’s most exciting emerging talents, as well as a place for the scene originators to spread their wings once more.

With that in mind, enter EVM128 and James Rudie – two of the most prominent names to emerge from the scene, their tunes heavily influenced by the soulful grooves that underpin the broken beat sound.

Combine this with Selectors Assemble founder IG Culture and Alex Phountzi aka NameBrandSound, the pioneers that have been there and done it all, and you have a line-up that truly bridges the gap between generations of London club culture. Not to be missed.

ON THE RISE STAGE

Always one of the most hotly-anticipated stages of StreetFest events gone by, we’re thrilled to be collaborating with our friends at Music is Remedy.

Champions of local talent and the brains behind such showcases as the Unsigned London festival, this stage will undoubtedly be the place to unearth the hidden gems that represent the lifeblood of London’s underground creative scene.

They’re tight-lipped about the line-up for this year’s event, and who can blame them? The beauty of this stage has always been in its surprises – but rest assured: it will not disappoint.

Each element of StreetFest brings its own unique flavour to the festival, but nothing defines the event more than its artists.

Each year, they work tirelessly to bring our locations to life – and each year, they surpass expectations in unimaginable ways. London collective Paint Freaks take the reins once more as they transform Gillett Square into a kaleidoscope of colour supported by our good friends Montana Cans, with a team of artists that have spent the last six years working around the world, bringing urban spaces to life with their unique brand of graffiti and murals.

So, with more than 20 artists ready to descend on Dalston, this year is set to be something special.

Is there a sport that defines alternative street culture better than skateboarding?

2018 sees the return of the Mini-Ramp Jam, curated by the team at Learn to Skateboard. The concept is in the classic mould: 20 skaters, one half pipe – and tons of jaw-dropping tricks from the best young boarders the country has to offer.

Combine this with a mammoth S-K-A-T-E tournament running throughout the day, the culmination of eight gruelling heats that have taken place throughout the summer – as well as BMX demos, and ‘Skate board’ workshops to kick off the day – and you’ve got the most dynamic display of urban sports seen in the capital this year.

Well, it wouldn’t be a block party without the dancers, would it? And with that in mind, we’re taking it right back to the old skool with a dance programme hosted by London’s finest: bSupreme.

We’ve invited some of our favourite crews down. We’ve assembled our own StreetFest dance squad. But the best part? We’re sending out an open invite to all who think they’re worthy. Challengers, consider this your warning call.

So if you and your people have got the moves and back yourselves… what are you waiting for? Rock up on the day, and the best crew will take home the crown. Simple.

THE BEST OF THE REST

Food: the most important piece of the puzzle. We’ll be closing off neighbouring Bradbury Street during the festival to create an exclusive food quarter, giving partygoers a pick of cuisines from all around the world.

StreetFest workshops: Catering for all levels and ages come down and test your skate, dance or art skills with our experts.

In true StreetFest style, there will be some extra festival specials on the day – stay tuned for more live tattooing, street barbers, street style, merch and more.